Today we wanted to go to Fujigoko.
There was a flowerfestival going on, so after lots of planning on the night before we headed out to the bus-terminal to get some tickets.

When we got to the ticket-dispenser, we unfortunately saw that all tickets were sold out for the next busses. There were some seats available in the afternoon, but we didn’t really feel like waiting four hours. Also seeing the tickets were sold out, we figured it would probably be pretty crowded there anyway, so we decided to explore some new areas nearby the bus-terminal. 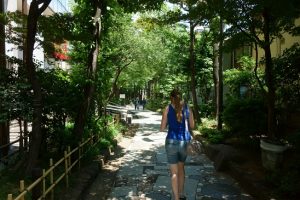 We first made a quick stop at Mr Donut, were we got some Pon de Ring donuts. These are made up from several machi balls (which are rice balls) and taste really good!

Afterwards we headed to Shibuya for some shopping, and we ran into this guy who had a cart filled to the brim with fluffy cats! Of course we had to make a quick stop so Rhonja could pet them 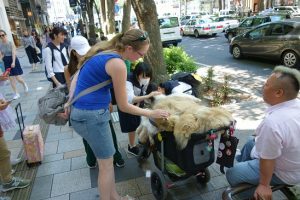 We ended the afternoon a little bit early since Rhonja wasn’t feeling that well, so we headed back to the hotel.
Fortunately around dinner she was fine again, so we ended our day the best way possible: Having dinner at CoCo, and playing some arcade games!