Like the weather was crap yesterday, it’s amazing today. With nothing but pure sunshine and 25 degrees all day long, we figured it’d be a good day to spend in the shade of temple gardens. Rhonja plotted a route visiting a bunch of them. We rented bikes at our hotel to reach them with relative ease. We knew from our last trip that riding a bike in Japan is pretty doable as most of the main roads are built in blocks. It did take a little time to get used to the strange traffic laws again though. Obviously you ride your bike on the left hand of the road, if you even ride on the road at all. Because on main streets you get to ride on the sidewalk, unless it’s safer on the road. Unless there’s parked vehicles. Unless you’re not allowed to. But then sometimes you’re not allowed to ride on the sidewalks either. It’s a monkey-see monkey-do kind of thing really, that seems to rely on your interpretation of what’s safest if the signs don’t indicate anything with 100% certainty. And then there’s the whole issue of parking your bike somewhere that’s allowed because there’s towing zones all over.. 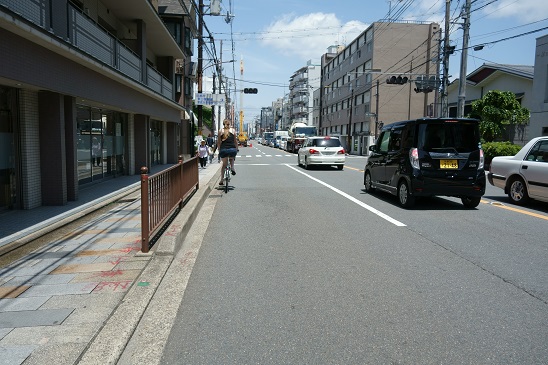 Once we got to properly start our temple-tour it was pretty great. Japanese temples are always pretty amazing to visit simply because there’s nothing quite like it. Some of the larger temples we visited were easy enough to find, but using google maps you sometimes take strange side-entrances you don’t expect. For example, for one temple we went up a very steep, rocky hill only to find out there was a better, more normal entrance a few hundred meters ahead. And there was a sort of back-entry through a suburb which we had to back-track again to leave since there were stairs everywhere!

In the end, we visited Yasaka, Ginkaku-ji (the silver temple) from where we walked to the Honen-in Temple. We rode our bikes to Shinnyodo and Konkaikomyoji. Rhonja especially enjoyed Shinnyodo, where we took the steep rocky side-entrance, since it was large, very pretty and with lots of Japanese green maple trees and few people. Marcels favourite one was the final one with the back-street entrance since it was pretty and we bought some very tasty sweet mitarashi-dango there. 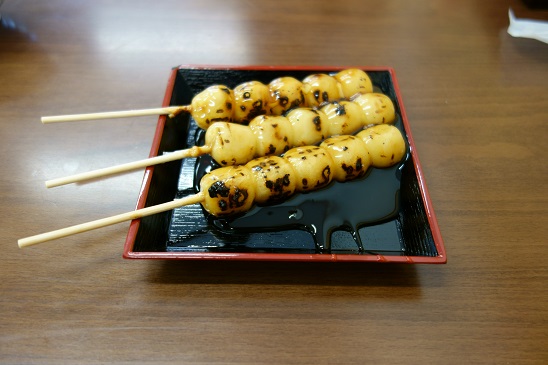 Later in the afternoon we went back to the shopping district. Rhonja located a bike parking lot wich appeared to be a motorcycle lot, but we figured if we headed there the lot attendant would be able to point us in the direction of a bicycle parking lot instead. And so it happened, and we parked out bikes in a special rack that would lock your bike in. You pay to get your bike back, so you should still lock your bike itself as well. We visited two Book-Offs which are stores that sell second-hand video games and often cool merchandise as well. Marcel is always on the look-out for certain japanese games and Rhonja enjoys browsing the various merchandise and helping Marcel look for specific games so it’s a fun store for both of us. Unfortunately, we didn’t find anything we wanted but still had a good time.

We also made a stop at a nearby arcade where we played some more Taiko No Tatsujn, the drum game we played before. Rhonja is starting to get the hang of it as well which makes it more fun for both of us to play together. She’s still nowhere near Marcel’s level though!

After the arcade we started to wonder if our bikes had headlights or not. So we headed back to our bikes to check. Though we did have headlights, we only had reflectors at the back. But so did all the other bikes we saw so we started to wonder if that’s what it was supposed to be like in Japan. We figured we’d better be safe than sorry and headed back to our hotel to return the bikes and eat nearby instead. Hotel staff told us that in Japan you only have a reflector at the back of your bike (good to know!).

Rhonja felt like eating curry, and though Marcel recommended we headed to a CoCo’s again (the curry chain-store), Rhonja was curious how other curry stores compared so she picked a few that got good reviews. One of them sounded amazing and got 4.9/5 stars on google which rarely happens. There’s only 5 curry’s to choose from and only 9 seats in the store! But unfortunately it wasn’t opened yet at the time google (and their store sign!) said it would be so we headed towards our second option. 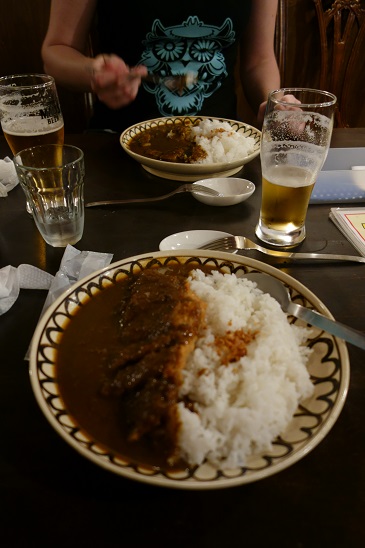 The curry we ended up eating was still really, really good though. After dinner Rhonja wanted to play some more at the arcade, something that Marcel is always up for. So we played some Pop-n-Music this time! Rhonja was left alone with 200 yen for a little while so she had to learn to navigate the Japanese menu’s a little bit. Once again, she felt like she started getting the hang of the game a little untill she saw Marcel bashing away at the buttons at a much, much higher level. 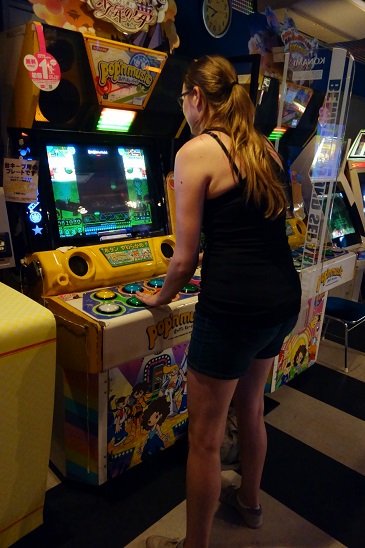 After we played the games a little we went back again for some well deserved rest.