After check-out it was time for us to move on to our next destination, Kyoto! Rhonja got a little help from an elderly traveller to make sure we were choosing the right train, but unfortunately at our transfer station her card had a malfunction and wouldn’t let her pass through the gate to get there! And to make matters worse, Marcel couldn’t get back through the gate to get to her! The gentleman was still around though and helped her communicate with a ticket attendant who told her she didn’t check out properly at the previous gate. So she had to walk back there (which was a different station so it was a few hundred meters, but they were connected underground), check the gate but not pass through and then she could come back?… Or something?
Rhonja decided to simply ask again when she got there to double check. The attendant there, after some explaining of the situation, was able to simply manually check out her card.

This time, Rhonja could pass the gate just fine and we even caugh the train we wanted to in the first place. It was really crowded and hot but about halfway some seats opened up for us. We were lucky at the hotel though and could check in right away, around noon, instead of at 3. The room is only slightly larger than the last one and you notice it’s an older hotel, the floor looks a little shabby. But once again it’s all clean, so it’s fine. This hotel also has bikes for rent so it’ll be fun to explore the city by bike sometime the next few days.

We decided to head for Nishiki first, Kyoto’s main shopping district with a few must-see things. On our way there we noticed the street was filled with Pokémon images. We don’t know why they were there, but they were cool. 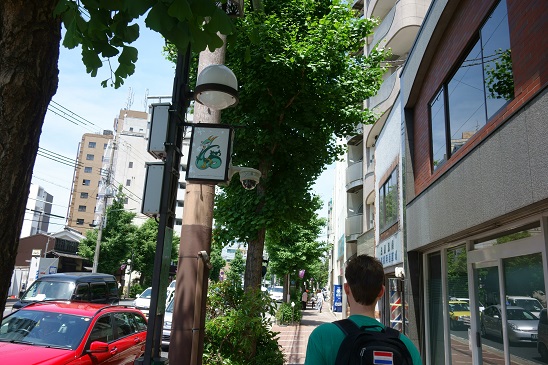 We visited the Yellow Submarine store where Marcel bought some boardgames he wanted. We wandered around a bit, played a game of Taiko No Tatsujin, drank an expensive beer in a bar and visited a small ukyo-e museum. Rhonja scored a pretty postcard of her favourite piece there and even got a free poster featuring another one with some advertising for the museum on it.
We got a bit hungry though, but it was way too early to eat dinner yet way too late to eat a real lunch. So Rhonja managed to find a noodle shop that also served some fried side-dishes. So we got some fried cheese and chicken with a huge bottle of beer for between the two of us. It was really good! We made a note to return there for dinner later during our visit in Kyoto. 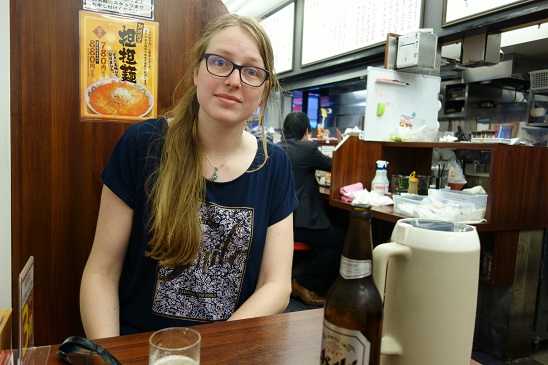 After dropping off our new goodies at the hotel we headed off for dinner.
We went to a small hot-pot place, where we got some delicious meats. For appetizers we got dried chili manta ray wing and their special: Fried potato salad. The potato salad was better than we anticipated, it was wrapped in seaweed, battered and fried. With the hotpot itself we ordered both pork and beef. Luckily we also got a small note which explained how to use the hotpot. First we had to ‘butter’ it up using a piece of fat. Afterwards we had to put in some sauce and cook everything in that. When the meat was done we could either dip it in yam-sauce, or a bowl of raw egg. (According to Rhonja raw egg here was fine, and it tasted good!) 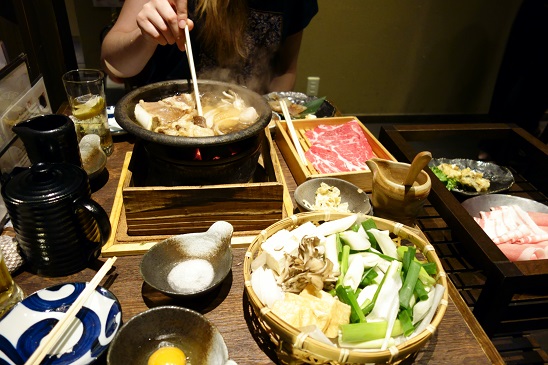 After we filled our bellies we made a quick stop at Yodobashi were we bought a few small souvenirs and headed back to our hotel. Tomorrow will be mainly about preparing/drinking tea, and it’ll be Marcel’s birthday!